Organic granola to jump-start your day 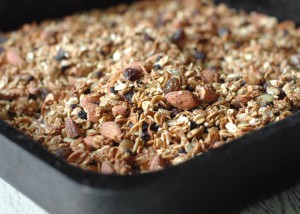 Delicious though they may be some granolas are more like dessert than breakfast cereal. This version is lighter but no less delicious meaning you can enjoy it everyday! The apple sauce makes up for much of the oil and sugar that is added to other granolas.

The best thing about granola recipes is that they can be altered to suit your tastes and/or what you have in the cupboard. This recipe uses barley flakes which give a lovely crunch, but you could add other rolled cereals instead or 100 % oats. Try different spices (nutmeg, ginger, cardamom), sweet syrups like agave and maple or experiment with different combinations of nuts, seeds and fruits.