All of the grains included in this section contain gluten and are therefore not suitable for people who suffer from Coeliac disease. 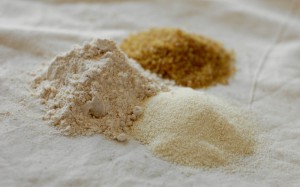 Wheat was one of the first grains to be domesticated and is the third most cultivated grain today after maize and rice. Wheat is divided into three genetic groups, the most widely cultivated of which are called ‘hexaploids’ and include common wheat and spelt.

Farro is an Italian term for wheat and commonly refers to the Einkorn, Emmer and Spelt strains. Because Farro is commonly sold as a generic rather than specific grain- and because there are regional and seasonal variations in its appearance- confusion surrounds the products marketed as Farro. In Italy Emmer is by far the most common type of Farro available, however in the English speaking world the term Farro is more often used interchangably with spelt.

Whole wheat grains are very high in energy and dietary fibre. They are also relatively high in minerals including magnesium, zinc, folate, thiamin, riboflavin, niacin and Vitamin B6. 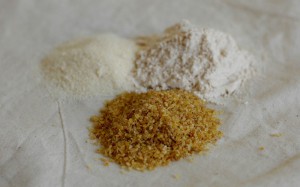 Grain  Whole wheat grains (or ‘wheat berries’) cook into plump, chewy little balls which can be used in salads, as an alternative breakfast cereal or as an addition to soups and stews. Wheat grain takes quite a long time to cook so pre-soaking is a good idea.

Bourghal, the cracked/broken wholegrain, takes far less time to prepare: depending on the size it can take as little as one hour soaking in cold water. Bourghal is a Middle Eastern staple and is traditionally used in tabouli, but it is great for other summer salads and even stuffing.

Flour  Wheat is most commonly encountered as a flour and is widely used in products like bread and pasta due to its high gluten content (gluten lends elasticity and form). Wholewheat flours are great for hearty tart shells, biscuits and muffins whilst sifted flours are used for baked goods that need a lighter and more delicate finish, such as cakes and pastries. At Wholefoods House we stock Demeter Farm Mill stoneground baker’s wheat flours, which range from a wholewheat flour to a light sift wheat flour (some of the bran has been removed) to an unbleached white wheat flour (most- but not all- of the bran has been removed). Self-raising varieties are also available.

Wheat germ, which is left over when wheat flours are refined, can be added to smoothies, muffins, breads and cereals in order to enhance their nutritional profile.

Semolina, the by-product of milling Durum wheat, looks like a coarse flour and is often boiled to make a thick, creamy porridge.

Couscous is made by coating tiny beads of moistened semolina in flour and is a staple in North Africa. It is usually steamed and then used like rice to accompany tagines and stews or as the base for salads. It is even used as a breakfast cereal or stuffing because of its lovely fluffy texture.

Spelt is a species of wheat. Thought to have evolved through cultivation rather than in the wild, spelt is probably a hybrid of a type of wheat and a wild goat grass. A staple food during Biblical times, spelt crops were largely replaced by common wheat in the 20th century. Its popularity has been revived by the organic farming movement because spelt requires less fertilisation than its protege.

Spelt shares many of the nutritional characteristics of wheat- it’s high in energy, fibre and a number of vitamins and minerals. Because it also contains gluten spelt is not suitable for people who have Coeliac disease, although some people who suffer from wheat allergies tolerate it. 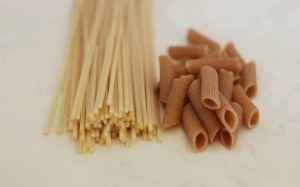 Spaghetti made from Kamut flour and penne made from spelt flour

Spelt is available in many forms. It tastes distinctly nutty and slightly sweet, making it a lovely alternative to wheat.

Flour  Spelt is becoming widely available as a flour and in breads, crispbreads and pastas, all of which are available at Wholefoods House. We carry Demeter Farm Mill stoneground whole spelt flour and unbleached white spelt flour. They have applications similar to their wheat equivalents, but be careful when adding liquid as spelt flour can be slightly less absorbant than wheat flour.

Other derivatives  Spelt is sometimes available as a wholegrain however drought conditions can make it difficult to source. Spelt is available at Wholefoods House in the form of Farro couscous and rolled spelt flakes, which are suitable as a replacement for oats in mueslis and crumbles.

Kamut Khorasan was introduced to America in 1949 by a military officer who was given 32 grains of the Egyptian wheat. He sent it home to his family’s farm where it was grown and then marketed as “King Tut’s Wheat”. These days Kamut Khorasan is actually a brand of flour distributed by Kamut International Limited. The grain is an ancient strain of wheat which is two times larger than the modern variety, lower yielding and more susceptible to environmental conditions.

Kamut Khorasan is trademarked to protect the unmodified grain, and the trademark stipulates that Kamut must be certified organic. Like wheat it contains gluten and is high in energy and fibre with a rich concentration of selenium, zinc and magnesium. Like spelt it is sometimes tolerated by people with wheat allergies.

At Wholefoods House we stock Kamut flours made by Four Leaf Milling (called ‘Egyptian Gold’) and Demeter Farm Mill (called Khorasan and available in whole and unbleached white varieties). We also have Kamut bread, crispbread, pasta, couscous and puffs (suitable for breakfast cereal and the like). 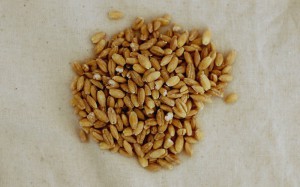 Barley is most commonly sold as pearled barley, technically not a wholegrain because the bran has been gently polished away to reduce cooking time. Pot barley or Scotch barley are terms used to describe the rarer, long-cooking wholegrain.

Barley was domesticised at about the same time as early species of wheat. Like wheat, it has been a staple crop of civilisations and has a rich cultural history, having been used to make early alcohols and even as a unit of measurement. Today it is the fourth largest grain in cultivation and is used in all sorts of products, from fermented drinks and alcohols to malt syrup and mugi miso.

Barley is a great source of energy, fibre, selenium and niacin. It contains eight essential amino acids and has been shown to assist in regulating blood sugar and lowering cholesterol levels.

Flour  Barley flour is a little drier than most other flours as it has a low fat content. It can be found in breads and is used for baking hearty items such as scones, breads and biscuits.

Grain  Barley is most commonly encountered as a chewy, textural grain in brothy soups and stews. It can be used to make a kind of porridge or as the basis for a salad.

Flakes  Rolled barley flakes can be used to give a crunchy texture to mueslis and crumbles.

Oats are sold in many different forms, from the wholegrain known as groats, to steel cut or Scotch oats, to ground oats known as oatmeal. Oats are milled into flour to make bread but their most common form is rolled oats. Stabilised oats are the most common form of rolled oats: they are steamed to destroy enzymes may gomrancid. Unstabilised oats are unsteamed, leaving the beneficial enzymes alive and the product in a more delicate state. Wholefoods House stock both kinds. 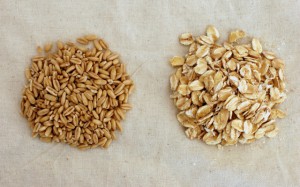 Domesticated oats are considered a relatively new grain, a secondary crop which was probably derived from the weed of primary cereal grains like wheat or barley. Once thought of as animal fodder, but traditionally a staple in many Scottish dishes from oatcakes to haggis, oats are now a popular health food.

Oats are high in energy and are renowned for their ability to help lower cholesterol levels. They contain more soluble fibre and protein than any other grain. The protein is of a very high quality, similar to that in soy beans. Interestingly the major protein in oats is not associated with gluten intolerances or Coeliac disease and for this reason ‘pure oats’ (grown in low wheat producing areas) are very controversially said to be safe for a gluten free diet.

Oats are a dynamic grain, however they are most commonly associated with porridge- rightly so, because they produce a beautifully creamy bowl! Groats, steel cut oats, rolled oats and oatmeal can all be used but as a rule of thumb the best porridge comes from the larger, least processed grain.

Flour  Oat flour and oatmeal are used with other flours or by themselves to bake breads and other hearty items such as oatcakes, pancakes and muffins. Oat flour is not widely available in retail outlets, but a raggy oat flour can be made at home by blitzing unstabilised oats in a food processor.

Rolled  Rolled oats are often used to make porridge, and are also the main ingredient in soaked Bircher muesli. They make a perfect granola or crumble topping when baked.

Other derivatives  Oat milk is available as an impressively creamy and sweet alternative to dairy and soy milks.

Rye is closely related to wheat and barley. It has been cultivated in Europe since the Middle Ages and is the most popular type of bread eaten in North Eastern Europe.

Rye is high in energy and soluble fibre with a lower gluten content than wheat, making it suitable for some people with wheat intolerance.

Rye is most commonly used as a flour to make crispbreads and bread, and is probably most recognised in pumpernickel- the very dark, dense bread eaten in Europe. At Wholefoods House we stock Demeter’s organic whole rye flour.

Triticale is a hybrid of wheat and rye: Triticum and Secale Cereale are their respective scientific aliases. It is a relatively modern crop, bred in Scotland and Sweden in the late nineteenth century.

The benefits of triticale are largely agricultural, combining the high yield and quality of wheat grain with the hardiness of rye.

Triticale can be substituted where other wheat like grains are usually used. At Wholefoods House we stock rolled triticale flakes, which are suitable for making mueslis, crumbles and so on.