All the grains and pseudograins included in this section are gluten free and therefore suitable for those who suffer from Coeliac disease. 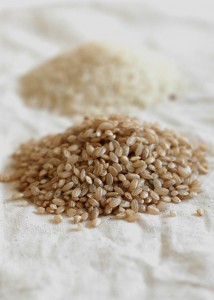 Rice comes in many different colours, flavours and textures but the most important nutritional distinction is related to processing. Wholegrain rice- known as brown rice- is nutrionally superior because it retains the bran and germ that white rice is stripped of.

For cooking purposes the major distinction in rice types is made according to the size of the grains. Long grain rices (like basmati and jasmine) are high in amylose, a starch with prebiotic qualities that gives a relatively dry texture. Short grain rices (inlcuding arborio and sushi rices) are high in amylpectin, a starch which gives them a sticky quality.

Rice is the second most cultivated grain today and the most important grain for human consumption: it provides an incredible 20 % of energy consumed by people worldwide! Rice is a particularly important food in Asia, the Middle East and South America and in many cultures the word for rice is used as a synonym for food or meal. Although brown rice has been looked upon in the past as a pauper’s food it is now considered a nutritionally invaluable health food and is central to the macrobiotic diet. 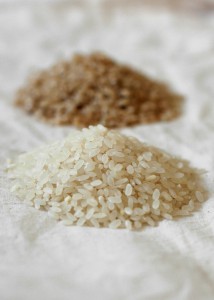 Brown rice is a great gluten free source of energy and dietary fibre, as well as magnesium and iron. It helps to regularise blood pressure, and rice bran and its oil are thought to help reduce cholesterol levels.

Grain  Naturally, brown rice takes longer to cook than white rice. Both types must be rinsed well before cooking to remove excess starch and other impurities. The grain is usually cooked by either the absorbtion method (an exact amount of water is added to be absorbed by the rice) or rapid boil method (the rice is added to plenty of boiling water and drained when done) although some types, such as sticky rice, are steamed after a long soak. Here are instructions for cooking rain fed brown rice that can be used for any brown rice.

Rice is a very dynamic grain, its uses limited only by the imagination: use as a base for salads, curries, risottos, rice balls, stuffing, stew, soups and porridges sweet or savoury. Beware that if you don’t plan to eat cooked rice immediately it needs to be cooled quickly and used within two days (to prevent it germinating bacteria).

Flour  Rice flour is used traditionally in a number of preparations from pancakes in Asia to flatbreads in the Middle East. These days it is a popular gluten free alternative, particularly when combined with other flours. At Wholefoods House we sell Demeter Farm Mill’s white and brown rice flours.

Other derivatives  Rice is made into all sorts of products, from Coeliac friendly noodles, pastas and breads to milks, syrups, miso pastes and vinegars and is even roasted and added to genmaicha, a Japanese green tea. Rice puffs and flakes, and rice bran and rice bran straws are popularly used in mueslis and cereals. At Wholefoods House we’ve got a huge range of rice products on our shelves. 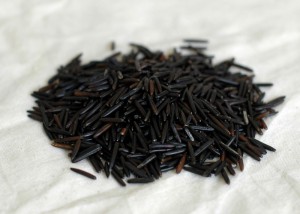 Wild rice is not directly related to common rice, although they are distant cousins. Whilst both thrive in wet environments wild rice grows submerged in water with only the flowering tip breaking the surface. Historically it was an important food source for the Chinese and Native Americans.

Like rice, wild rice is gluten free. It is a great source of energy and fibre and contains more protein than most grains, along with the amino acid lysine. Wild rice is rich in B vitamins, particularly niacin.

Although cooking time varies most wild rice cooks at a similar pace to brown rice. It is pleasantly chewy with a complex nutty flavour. Its striking inky appearance makes wild rice a dramatic centrepiece, great forsalads, soups and stews.

Maize (corn) is the most widely cultivated grain today, although a large amount is consumed by animals. Corn was domesticated about 10 000 years ago in South America and later spread to Europe, where it was adapted to many regional cuisines.

Corn/maize is an important gluten free source of energy, protein and fibre. It is a good source of minerals and B vitamins.

Grain  The dried corn grain, known as hominy or posole in America, is very rare in Australia.

Cornmeal  Various consistencies of ground corn- cornmeal- are used for different preparations. Very finely ground maize flour is used in breads and tortillas and can be added to gluten free flour mixes, whilst refined cornflour (cornstarch in U.S. recipes) is a common thickener for gravies and so on. Polenta is sold in varying sizes, from fine (instant) to coarse. It cooks into a thick, creamy gruel than can be eaten sweet or savoury and solidifies when cooled: lovely when grilled and served with poached eggs. Polenta can be added dry into tart and biscuit doughs, some cakes, cornbread, muffins and as an alternative crumb.

Derivatives  Highly refined and processed corn products are used widely in the fast food industries, so excessive consumption of corn is far more of a concern than deficient consumption. From buns to fizzy drinks and sweets that use cheap corn syrup as a sweetener corn couldn’t be more prevalent in the mass market. Needless to say these are the kind of corn based products to steer well clear of! 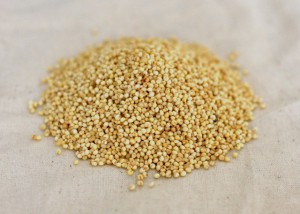 Millet is a general term for a number of small seeded  grasses of similar species, a staple of the African diet. Millet originated in East Asia about 10 000 years ago and is said to have had greater prevalence in Chinese pre-history than rice!

Millet is gluten free and is rich in B vitamins, with a protein content of about 10 %.

Grain  Millet should be rinsed before cooking and can be toasted to add an extra dimension of flavour. It cooks relatively quickly and in many cultures it is eaten as a porridge- for which it has a perfectly soft consistency- either sweet or savoury. It can be added to grain mixes and gives body to casseroles and soups. Millet puffs and rolled millet are available and make a great alternative breakfast cereal.

Flour Millet flour is quite fine and is seldom used alone: it is more suitable in combinations and can be added to gluten free flour mixes. 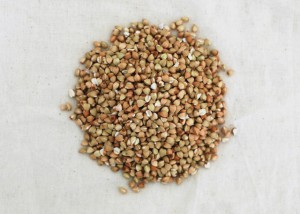 Buckwheat is considered a “pseudocereal”: although it’s treated as a grain it’s classified as a fruit rather than a grass. The hulled buckwheat “grain” is made up of mostly endosperm with a layer of germ which varies in colour from dark tan to a near khaki-green. Buckwheat is believed to have been cultivated in Asia about 5 000 years ago and is today touted as a fast growing, low maitenance crop which needs little fertilisation or insect control. It has a very earthy, distinctive flavour.

Buckwheat is a gluten free source of complex carbohydrates and contains the 8 essential amino acids along with B Vitamins and Vitamin E. It contains high quality proteins which are easily digested and absorbed by our bodies. Buckwheat helps regularise blood pressure and may aid a diabetic’s response to insulin.

Whole  Buckwheat is most commonly used whole to make porridge, the best known example being the Polish “kasha” in which the groats are roasted and simmered until very soft. Buckwheat can be sprouted and used in baked items and mueslis or can be bought puffed for similar uses. 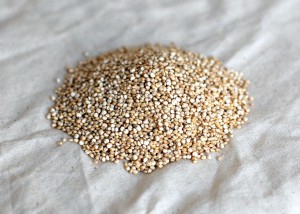 Quinoa, like buckwheat, is a “pseudocereal” grown primarily for the seeds which cluster at its extremities. Quinoa is related to plants such as beetroot and Swiss chard, an obvious connection if you have ever come across its leaves (edible but rarely available). Quinoa originates from the Andean region of South America and has been an important cultivated food source there for approximately 6 000 years: the Incass called quinoa the “mother of all grains”. Spurned by colonialists as a primitive and uncivilised food quinoa has recently turned the tables, invading the health conscious Western world on the back of its “superfood” tag.

Quinoa grows in a broad spectrum of colours but the three commonly cultivated types are white, red and black. There are subtle differences in the taste, texture and cooking methods for each but generally the darker types are thought to be richest in protein and fibre.

Quinoa is a fantastic gluten free source of fibre and vegetable protein. Not only does it contain between 12-18 % protein, it is also high in lysine and contains all of the essential amino acids meaning that these proteins are easily absorbed by the human body. It is also a good source of magnesium and iron.

Whole  It is very important to wash quinoa: the “grain” is covered in saponin, an unpalatable natural pest deterrent. Most packaged quinoa has been rinsed but it’s better to be safe than sorry! When cooked the grain has a fluffy light texture and a nutty flavour which makes it a good alternative to everything from couscous to rice. Moreover it can be cooked just as easily as white rice, either by the absorbtion or rapid boil methods; you can even cook it in a rice cooker! When quinoa is cooked through the germ (the little tail) will separate from the seed. Try using it as a base for summer salads such as tabouli or in dishes that usually use rice, such as pilaf. It can also be added to soups, stews and casseroles and makes a delightful porridge or cool breakfast cereal. Similarly, quinoa puffs and flakes are a great gluten free addition to mueslis and so on.

Flour  Quinoa flour is relatively high in fat, making it a lovely rich addition to biscuit doughs and pancake and cake batters. It must be stored carefully- ideally in the fridge.

Amaranth is also considered a “pseudocereal” and refers to a number of related species with strikingly beautiful, often crimson-coloured leaves and tiny seeds that cluster at its extremities. Amaranth was first grown as a crop 6 000 years ago in the Americas and was, with quinoa, one of the first staple foods of the Incans.

Amaranth is a great gluten free source of fibre and contains between 14-16 % protein. Because amaranth is high in lysine and contains a good balance of amino acids the protein component is easily assimilated by our bodies.

Whole  Amaranth must be carefully rinsed before cooking: use your finest sieve or muslin as the seeds are extremely small; on the upside, it cooks very quickly. Amaranth has a slightly grassy taste that goes nicely with sweet vegetables like pumpkin and carrot. It can be added to mixed grain bowls and porridges, soups, stews and molés. The popped and rolled cereal is a good addition to gluten free mueslis and crumbles.

Flour  When using amaranth flour keep in mind that it is very absorbant and therefore binds batters: because this makes the final product quite dense, avoid substituting more than 25 % amaranth flour in cake and bread recipes. Amaranth stands up well to bold tastes so experiment with sweeteners like dark muscavado sugar or fragrant, floral honeys.