Thanks to its impressive nutritional attributes and delicious taste the coconut pops up in every corner of our stores these days, from the pantry department to the fridge, freezer and fresh produce display. We’ve got coconut chips, yoghurt, water, ice cream, cream, milk, butter/oil, flour and sugar… you could literally bake a cake out of 100% coconut products- that’s pretty special, right?! –    Coconuts contain 60% fat, the principle fatty acid being lauric acid. Coconuts- and particularly the oil- are nature’s number one source of lauric acid, giving them potent immune enhancing properties and the ability to protect the body against viruses, yeasts, parasites and other bad bacteria.

–    Coconuts are an alkaline-ash forming food, meaning their spent energy is thought to create an environment which deters disease in the body.

–     Coconut water is a sterile, electrolyte rich source of hydration (particularly handy to know if you ever find yourself stranded on desert island!). 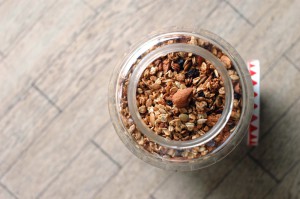 – Add coconut chips to trail mixes and mueslis, like in this Barley & Oat Granola

– Swap your regular yoghurt for coconut yoghurt, whether at breakfast or as a side to your favourite spicy curry

– Add coconut milk or cream to Asian soups and curries: here’s a Pumpkin, Coconut & Coriander Soup that does just that 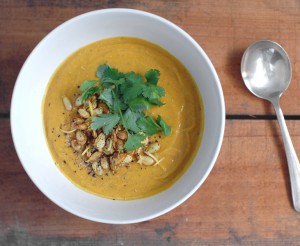 – Use half coconut cream and half water to cook rice by the absorption method: throw in a bruised stalk of lemongrass, some star anise and a cinnamon quill for beautifully fragrant rice. Serve with stir fries, or enjoy as is!

– Make healthy green/fruit smoothies using coconut water as the base

– Make a simple accompaniment to curries by tossing slices of banana in a little lime juice, salt and toasted desiccated coconut

– Sweeten curries with coconut sugar: because coconut is a palm coconut sugar is a type of palm sugar, meaning it’s perfect in Thai, Malaysian & Indonesian dishes 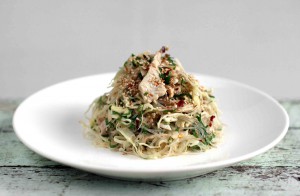 – Use coconut flour to replace half the regular flour in a cake, muffin or loaf recipe: those for berry and banana based treats are especially amenable

– Try baking with coconut sugar, particularly as a substitute for brown or rapadura sugar: the deep, caramel flavour is very similar

– Use the shredded flesh from fresh coconuts as an addition to noodle dishes as in this Chicken, Mint & Coconut Noodle Salad: it goes particularly well in recipes with lots of fresh herbs

– A non-culinary way to finish the coconut husk is to toss it on the camping fire: the smoke is said to deter mosquitoes