Last week some of us at Wholefoods House were lucky enough to see Joel Salatin of Food, Inc. fame speak about his sustainable, “beyond organic” farming methodology. Presented by Milkwood Permaculture and Sydney Food Fairness Alliance, the event was introduced by Kylie Kwong and ended with a standing ovation. It was truly inspiring. 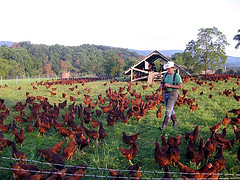 Joel Salatin is an American farmer, author, lecturer and accidental entertainer whose fundamental approach to farming is quite simple: he believes that nature provides the best and most profitable blueprint for food productivity, and that in order to enhance the potential of the land we should follow (as farmers) and support (as consumers) naturally informed farming processes. It’s more give and less take to the land that nutures us.

Salatin’s Polyface Farm in Virginia’s Shenandoah Valley is a huge success story and is described as “a family owned, multi-generational, pasture-based, beyond organic, local market farm and informational outreach” on their website. Salatin calls himself a “Christian-libertarian-environmentalist-capitalist-lunatic-Farmer”. Clearly, these labels are supposed to defy pigeonholing. So if you think holistic, sustainable organic farming has to be all about vegetables and vegetarianism Salatin wants you to think again: he is passionate about grass-fed livestock and animal husbandry, and rears everything from poultry and rabbits to cattle and pigs.

Polyface Farm operates on a number of logical principles which resist industrialisation and emphasise the vitality of the soil and the natural, complimentary relationship between animals and the land they graze on. Therein he celebrates what he calls “the pigness of the pig”. Also central to Polyface’s practice is the notion that keeping food production local, transparent and community based is absolutely essential for environmental, social and cultural well-being.

Understandably a lot of what we hear about food and the sustainablity of our food sources today is defined by negativity so it was incredibly refreshing and exciting to hear Joel Salatin talk enthusiastically about the economic and environmental viability of a food network operating on an ethos of community, fertility and nature. Salatin’s message  essentially puts the spotlight on the liveliness of our food chain- the people, animals and pastures- and challenges the dehumanising  “bigger, fatter, faster, cheaper” convention that dictates much of modern food production. Fittingly, he does it with unsurpassable energy and animation.